Besides the Klingons, the most well known villains in Star Trek were the Romulans. It is a little known fact that the two enemy races had formed an alliance that allowed them to trade military technology with each other. One result of the pact was the Romulan version of the D-7 Battle Cruiser as depicted in “The Enterprise Incident”. In the episode, the U.S.S. Enterprise was surrounded by Romulan commanded versions of the ship. This brings the concept to life with blazing Romulan bird graphics that truly set it apart from its Klingon counterpart.Scale: 1/1000.
Skill Level: 2 (ages 10 and up).
No glue or paint required.
Both Romulan and Klingon Decals included.
Includes chrome parts.
Optional decals.
Dome base. 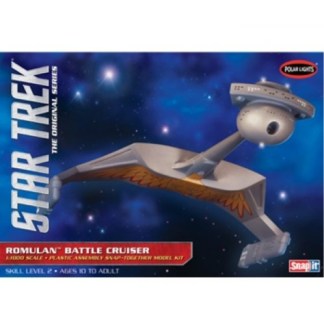