The wave of the future: Even in the futuristic setting of Star Trek, some things would become “outdated” such as the venerable U.S.S. Enterprise. The U.S.S. Excelsior, featured in this kit, was chosen as her successor.

Optional detailing: This kit features parts that allow the kit to be built as the NX-2000 from Star Trek III: The Search For Spock or as the NCC-2000 as featured in Star Trek VI: The Undiscovered Country.

Marking decals: This kit includes a big decal sheet full of registry and pennant markings for the NX-2000 and NCC-2000 versions including NX strongback markings. 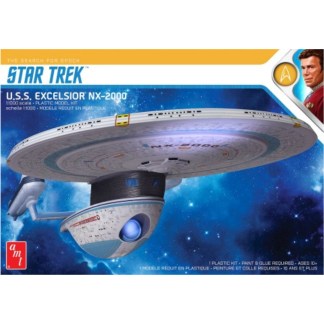